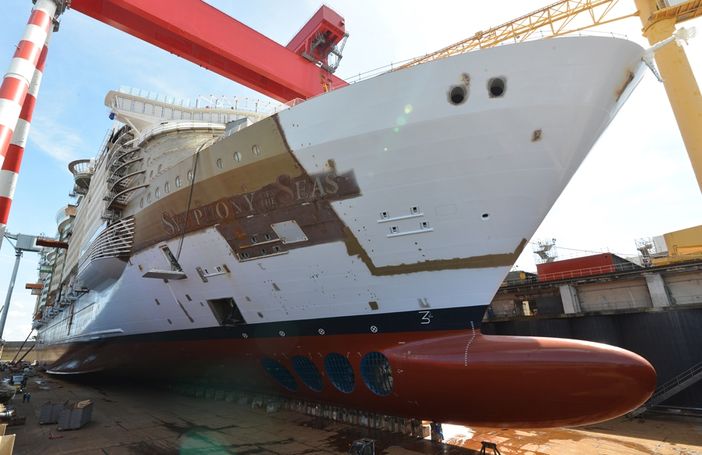 For example, some of the amenities that will be offered on the Symphony include sophisticated and diverse dining establishments, a bionic bar featuring bartender robots, and Broadway-type entertainment. In addition, cruise-goers can enjoy such unique attractions as the Ultimate Abyss (the tallest slide at sea), the three waterslides representing the Perfect Storm, and the one-of-a-kind Aqua Theater with its memorable waterfront entry.

During her first season, the Symphony of the Seas will journey to locales in the Mediterranean, calling on ports in Palma de Mallorca and Barcelona, Spain; Rome and Naples, Italy; and Provence, France. Following these initial journeys, the ship will begin seven-night Eastern and Western Caribbean sailings. The ship will begin its Caribbean itinerary after it sets anchor in Miami during early November.

Currently, the exterior has been completed on the ship. The second phase of construction will concentrate on beautifying and finishing up the interior décor of the Symphony. Reservations are now being taken for the summer and autumn trips through Royal Caribbean.
Source: Royal Caribbean Press Center

➡ Royal Caribbean’s Symphony Debuts as World’s Largest Cruise Ship in April 2018
➡ Royal Caribbean Feature, the North Star, Makes Company Entry in the Guinness Book of World Records
➡ 4 Things to Do on Anthem of the Seas for Adrenaline Junkies
➡ Royal Caribbean in China Continues to Exert its Influence in the Asian Marketplace
➡ Labadee Shore Excursions Add Special Interest to the Caribbean Cruise Experience