Therefore, it appears that the ship will rotate its cruise schedule between Australia and China. The Ovation of the Seas, now under construction, will become Australia’s largest cruise ship ever as well as its most technologically advanced vessel regionally.

Gavin Smith, the regional vice president for RCI in the Asia Pacific region said that, “Ovation of the Seas is slated to take the cruise experience in Australia to a new tier, offering an interesting array cruise ship features and amenities.” 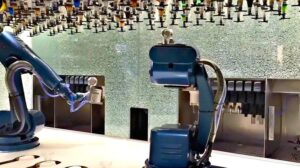 For example, the Bionic Bar on the ship will feature bionic arms that mix cocktail drinks, including stirring and shaking cocktails, while dining is featured at such illustrious establishments as Jamie’s Italian.

Ovation of the Seas will also serve as host to SeaPlex, the biggest indoor sports and entertainment center at sea. The facility offers such activities as bumper car, roller skating and basketball activities.

The arrival of the vessel, Ovation of the Seas later in 2016 will cause the current fleet to expand to five ships. Other Royal Caribbean International vessels in Australia include the Radiance of the Seas, Explorer of the Seas, Voyager of the Seas and Legend of the Seas.

➡ Cruise Highlights of Harmony of the Seas will Include such Features as VOOM, the Bionic Bar and the Ultimate Abyss
➡ Allure of the Seas Refurbishment Emerges from Drydock with Exciting New Amenities prior to European Cruises
➡ Royal Caribbean International’s Newest Cruise Ship, Anthem of the Seas, Offers an Unparalleled Holiday Getaway
➡ Looking at the Different Quantum of the Seas Itineraries
➡ The Allure of the Seas Features All a Cruise Ship Needs