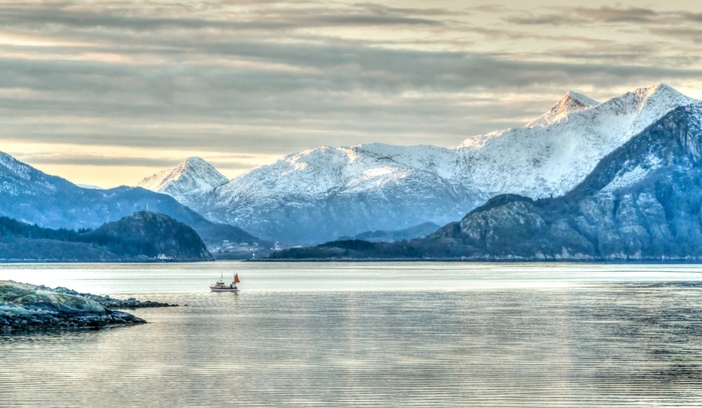 There is no denying that the Arctic is one of the most hauntingly beautiful environments on earth. Stretching all the way from North Scandinavia, across Northern America to Siberia, the Arctic has enthralled explorers and adventurers for centuries. Nowadays though, it’s the wildlife that attracts visitors thanks to species such as polar bears, musk ox, wolves, walrus, beluga, and narwhal.

Arctic Cruises That Will Take Your Breath Away

Thanks to the expedition cruise industry, much of the Arctic is now accessible by ship. Forget stomping through snow and ice for days or taking a week long dog sled trip, you can now sip champagne as you take a luxurious cruise past icebergs, snow-capped peaks, and polar bears! To help you plan your perfect luxury adventure, I’ve listed the top 5 luxury Arctic cruises available today.

Potentially the greatest cruise on earth, the infamous Northwest Passage was, until very recently, cut off to cruise ships due to impenetrable ice. However, thanks to global warming, the Passage is now accessible to even the biggest of cruise ships. This means you can now witness incredible wildlife such as polar bears and musk ox, visit ancient Thule remains, and interact with local Inuit people  – all without risking your life (which is a definite bonus)!

Despite the melting ice, the route can only be sailed in August and September when temperatures are at their warmest. Several luxury ships make the Passage during high summer including L’Austral and Le Soleal. The  route takes you from Greenland, across the Canadian Arctic, to North Alaska. All in, you’re looking at 3 weeks and $21,000 for a basic suite. For a top level suite you’ll be looking at over $65,000 per person… ouch!

Ever thought you would see polar bears and brown bears in one cruise? Thought not. Although relatively unknown in the expedition cruise world, the Russian Arctic is definitely one of the most epic options out there, especially for wildlife lovers. Most cruises depart from Alaska before crossing the Bering Strait and heading up the Kamchatka coastline where brown bears are spotted frequently. From there you sail to Wrangel Island – a World UNESCO heritage site. Known commonly as the ‘Polar Bear Nursery ‘, Wrangel Island is home to hundreds of polar bears and you’ll be unlucky if you don’t see a few.

3 luxury vessels offer this itinerary; the National Geographic Orion, the Silver Explorer, and the Le Boreal. Each ship is well equipped and offers you all the luxuries of home plus more. Because the cruise is so remote, the costs are quite high. Prices range from $10,000 – $30,000 depending on the suite. If you want to experience something completely new and away from the main sailing routes, this is it!

The Norway to Svalbard itinerary is one of the most popular options in the arctic, and for good reason. The cruise combines the incredible fjords of Norway with breathtaking landscapes and wildlife of Svalbard. Most itineraries depart from the Arctic city of Tromso before heading north through the fjords and inlets that dot the Norwegian coastline. One of the highlights of this trip is visiting Bear Island on your way to Svalbard. The nature reserve island hosts literally thousands of seabirds that nest on the island’s steep cliffs.

Once in Svalbard you’ll understand why it’s one of the most visited Arctic destinations. The sea melts into the ice and creates breathtaking landscapes that seem to be endless. It’s also one of the best places to see polar bear, fox and reindeer. The Silver Cloud and the National Geographic Explorer offer luxury itineraries starting at around $10,000.

There are no luxury options when it comes to the North Pole, but there is an epic ship with a price tag of $28,000 per person. The ship is called 50 Years Of Victory and she is a beast! Nuclear-powered and able to cut through the thickest of sea ice, the 50 Years Of Victory cuts an impressive sight as she plows her way to the world’s most northern point.

En-route you’ll visit the Franz Josef Land archipelago where you’ll spot whales, polar bears and millions of seabirds! Once you reach your destination you celebrate with a glass of champagne and, if you want, a hot air ballon ride – does it get any better than that!? If you have the money this is one trip you’ll never forget. Make sure you’ve packed well though, this is a cold cruise!

Although not as well known as Svalbard, the Canadian Arctic is potentially a more varied option, especially for wildlife. Made up of over 35,000 islands, the Canadian Arctic archipelago attracts a wide variety of species including polar bear, musk ox, wolves, and plenty of marine mammals. It’s certainly one of the best places in the world to see beluga and narwhal. You can even snorkel with them if you want!

There are plenty of options when it comes to luxury vessels. Two of the most popular are the Silver Cloud and L’Austral. Almost all luxury Canadian Arctic itineraries include Greenland – this is a great thing as Greenland is a truly unforgettable region in it’s own right! Prices start from $11,000, but are more commonly closer to $15,000.

If you would like more information on Expedition cruise options, please check this site out. Have a great cruise!

This article, “Into Icy Realms – 5 Luxury Arctic Cruises”, was written by Burnham Arlidge, the lead editor of antarcticaguide.com

➡ 7 Things to Do in Antarctica You Never Thought You Could Do
➡ The 8 Most Typical Things to Do in Havana, Cuba
➡ 5 Reasons Why You Should Take a Caribbean Spring Break Cruise
➡ What the Cruise Lines’ Private Islands Have in Store for You
➡ Top Attractions in New Zealand to Experience When Cruising Down Under