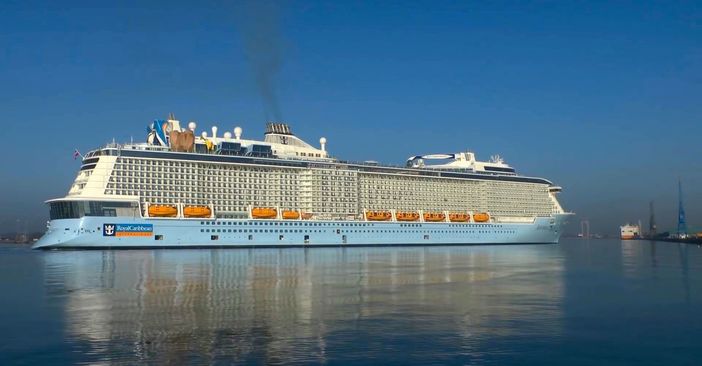 The newest of Royal Caribbean International’s cruise ship, the Anthem of the Seas was christened on April 20, 2015 in Southampton, UK. The festive christening showcased talent in the form of  a boy band, DJ, Scottish pipers and the cast from the Queen musical entitled, “We Will Rock You.”

The Chairman and CEO of Royal Caribbean, Richard Fain, commented on the new cruise ship addition. He said, “I believe . . . the architects and contractors have taken a ship design and turned it into a masterpiece.”

The 4,180 passenger ship will offer future cruise-goers with a memorable cruise ship experience, all of which will include exemplary cruise ship catering and services. The ship is scheduled for its first revenue cruise journey on April 22, 2015. At that time, the ship’s itinerary is slated for a number of Mediterranean cruise journeys.

Guests who travel the Anthem of the Seas will enjoy such activities as a RipCord by iFly diving adventure and such game-changing technologies as wireless connectivity and robotic bartending and serving.

This coming fall the Anthem of the Seas, one of the Quantum Class ships of the Royal Caribbean International line, will sail into Cape Liberty Cruise Port in the New York Harbor. From there, an itinerary will be planned for holidays to the Bahamas.

SeaPlex, onboard, features such fun entertainment as roller skating, circus school and bumper call rides. In addition, multidimensional shows will be showcased at the ship’s Royal Theater, which hosts “The Gift” and “We Will Rock You.”

Weighing in at 167,800 gross tons, Royal Caribbean’s Anthem of the Seas will span 18 decks and feature 2,090 staterooms. The ship will sail from Southampton, UK for its inaugural season before sailing to New York Harbor and its new homeport of Cape Liberty Cruise Port located in Bayonne, New Jersey.