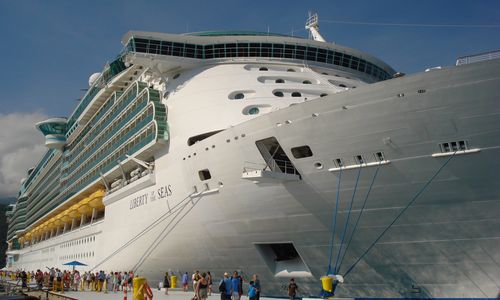 The Real Picture in Passenger Capacity

The top nine biggest cruise ships fully stuffed can take among themselves more than 42,000 passengers, the same number a medium-sized soccer stadium can comfortably hold. The top three biggest cruise ships in terms of gross tonnage are Royal Caribbean’s Allure of the seas and Oasis of the Seas and NCL’s Norwegian Epic.

Allure of the Seas is joint number one with Oasis of the Seas. Both manage an impressive gross tonnage of 225,282 and can accommodate up to a maximum of 6,300 passengers each. Each of them is constructed with 2,706 staterooms making them the biggest cruise ships to sail the world’s oceans. They have beam dimensions of 65 meters making them the realistic contenders for the largest cruise ship in the world.

Norwegian Cruise Line’s Norwegian Epic comes in a distant second with a total gross tonnage of 155, 873. It has a length of 1,081 feet and a total of 2,114 staterooms making it the second largest cruise ship in the world. It can carry up to a maximum of 4,100 passengers. It has a very impressive water park that consists of five hot tubs, three pools, and three multi-storied water slides.

Freedom of the Seas with a gross tonnage of 154,407 comes in as the fourth biggest cruise ship in the world, a position it shares with compatriots Liberty of the Seas and Independent of the Seas. The Royal Caribbean International owns all three of these. They each have 1,817 staterooms that can take in up to 4,375 passengers.

Cunard’s Queen Mary 2 is ranked the seventh largest cruise ship. The Cunard’s flagship is made with retirees in mind and has some of the most refined activities on all cruise ships. It is only in the Queen Mary 2 that speeches on art and history make up part of the afternoon entertainment.

The Norwegian Breakaway comes in eighth at 146,600 tons. It is the largest cruise ship using New York as its homeport. Aside from the ship’s innovative aqua park, its quarter-mile shops and restaurant-filled promenade is equally breathtaking. This promenade also features a spa, casino, and a club.

The Norwegian Getaway, the newest of the Norwegian Cruise Line vessels, closes the chapter of the 9 biggest cruise ships. It has a gross tonnage of 145,655 and can take up to 4,000 passengers.

➡ Live Through A Different Kind of Travel to Sydney, Australia
➡ Carnival Freedom: Your Ticket to the Free Waters of the Western Caribbean
➡ Experience the Best Luxury Mediterranean Cruise from Venice
➡ What the Cruise Lines’ Private Islands Have in Store for You
➡ Top Attractions in New Zealand to Experience When Cruising Down Under