Port of Genoa, Italy – A Mediterranean Cruising Stop that is Rich in History 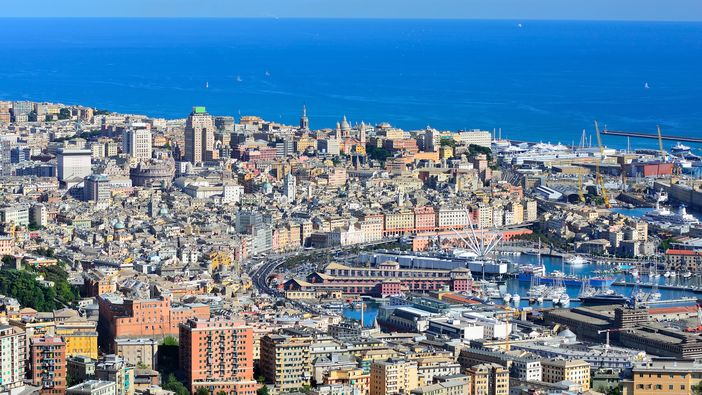 Have you ever thought about visiting Italy? Do you have the country included in your future cruise plans? Often, the port of Genoa is a point of departure or a port of call that does not receive the acclaim it deserves. If you are planning a cruise in the Mediterranean region and Genoa is one of the stops, then make sure you add this port city as an important departure point or stopover on your travel itinerary.

The Port of Genoa and Its Points of Interest

Some of the following sites are must-see attractions if you plan to stop over or depart from the port of Genoa.

When you view the Cathedral of San Lorenzo, “Gothic” is the word that easily comes to mind, whether you are viewing the church from the outside or peering at its interior. The Gothic windows are a notable architectural feature as is the pulpit in the church, which was assembled during the 1300s using antique fragments.

The Palazzo San Giorgio in the port of Genoa was erected in 1260 by Guglielmo Boccanegra, who was the uncle of Simone Boccanegra, Genoa’s first ruler. The palace was used as a prison for some time, with its most famous resident prisoner being Marco Polo.

Located in the heart of the city and financial district, the Piazza de Ferrari Fountain is surrounded by banks, insurance companies and buildings made of steel. This part of the port area is referred to as the “City” by the locals in town.

This landmark pays tribute to Giuseppe Garibaldi, an Italian political and military figure who lived from 1807 to 1882. When he was just in his twenties, Garibaldi was a member of patriotic revolutionaries. He was forced to flee the country and exert his influence elsewhere in the world after a failed insurrection.

The Passeggiata Anita Garibaldi is a promenade named after the wife of a great Risorgimento general. The walkway meanders along the coast of Genoa for approximately 2 km. Visitors using the walkway pass by many easily accessible beaches and plenty of climbable terrain. The original path for the promenade, built in the 19th century, permitted fishermen to access their fishing grounds and the harbor.

The Teatro Carlo Felice is the main opera house in Genoa and is home to operatic, ballet and orchestral performances and recitals. Located on the Piazza de Ferrari, the hall is named after a duke, Carlo Felice. The building, the construction of which dates from December 24, 1824, presented its inaugural performance of Bianca e Fernando by Bellini on April 7, 1828.

Noted as the biggest aquarium in Italy, the Genoa Aquarium is located in the old harbor section of the port city. The site welcomes over 1.2 million visitors yearly. Many visitors to the site say that the building resembles a ship headed out to sea.

Where will your travels take you? If your answer is Genoa, then you won’t want to spend any more time delaying your visit. Make your cruise travel plans today to see this historic and interesting Italian port and cruise stopover on the coast of the Mediterranean Sea.

Experience the Mediterranean: Cruise to Ibiza and Discover Old Town