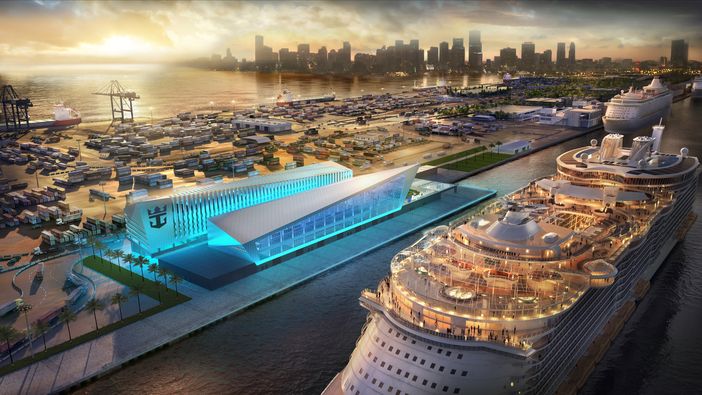 Demonstrating how popular cruise travel is in Miami, Royal Caribbean Cruises Ltd. announced that it plans to build and run a Royal Caribbean cruise terminal in the Florida city. The new addition, which will serve as a homeport for the cruise line’s international ships, will be situated at PortMiami.

The terminal will also be a major hub for the cruise line’s 5,400-passenger Oasis-class vessel, the largest and most innovative cruise ship in the world. The agreement for the construction is slated to be addressed on July 6, 2016 by the Dade County Board of Commissioners in Miami.

According to the company, the firm of Broadway Malyan is being designated to design the cruise facility. The firm competed with four of the world’s major architectural firms to win the project. The cruise line chose the company because of its cutting-edge design and creative ideas.

Nicknamed the “Crown of Miami,” the 170,000-square foot Royal Caribbean cruise terminal will be built so that the points of the royal headgear are seen from the water. The “M” in Miami will be seen from both the west and east as well. In addition, a slight sense of rising waves or passing ships will be seen when ships come into the port on the terminal side. During the night, the facility will be strikingly lit, thereby creating a stunning impression on the PortMiami seascape.

The cruise terminal is not the only upgrade for Royal Caribbean in 2016. The company will also be including a 20,000-square-foot innovation lab as well. The lab will serve as an addition to the company’s headquarters, which are also located at PortMiami. The lab will be built in order to develop more of the cruise line’s innovative ships.