Upon delivery, the Symphony of the Seas will spend her first summer season visiting destinations in the Mediterranean, such as Barcelona, Spain, Provence, France, and Rome and Naples, Italy. She will then proceed to Miami in November to start seven-night Caribbean itineraries.

As the largest cruise ship in the world, the Symphony encompasses 230,000 gross registered tons. She also offers 28 more staterooms than her newest sister ship, Harmony of the Seas. In addition, the ship boasts innovations and experiences that have given world-class recognition to the Harmony as well.

Some of the award-winning favorites include creative and sophisticated dining, Broadway-style entertainment, the AquaTheater (an iconic waterfall), and the Perfect Storm trio of waterslides. The Ultimate Abyss will also be featured, which is acclaimed for being the tallest slide at sea. 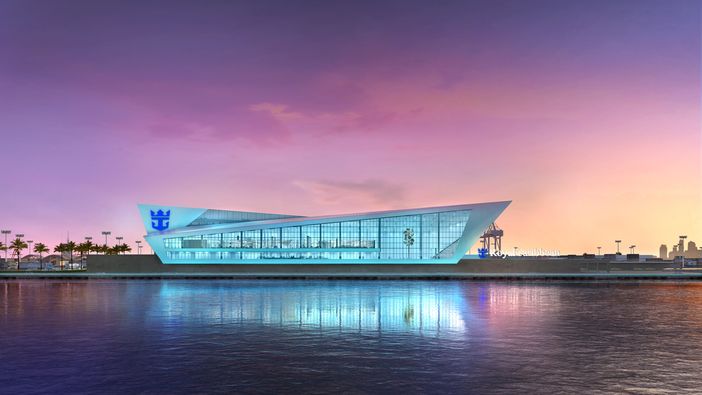 The “Crown of Miami,” which is scheduled to be completed in time for the Symphony’s arrival, is the most innovative cruise facility in the U.S. The 170,000-square-foot terminal is expected to bring in $500 million in revenue and add 4,000 jobs to the Miami-Dade County area. Royal Caribbean has projected that it will generate at least 1.8 million passenger moves at the new terminal, which represents 30% of the port’s estimated amount of passenger traffic.

Again, if you are seeking to book accommodations on the Symphony, reservations are currently being taken for Mediterranean and Caribbean itineraries. Reservations will be accepted through travel operators as well as directly through Royal Caribbean International.
Source: Royal Caribbean Press Center

Cookies are small files that are stored on your browser. We use cookies on our website to give you the most relevant experience by remembering your preferences and repeat visits, analyze how you use our website, and deliver relevant ads to you. For these reasons, we may share your site usage data with our social media, advertising and analytics partners. By clicking "Accept", you consent to the use of ALL the cookies. You can learn more about how we use cookies by visiting our "Privacy Policy" page. California residents can also exercise their personal information rights through the "Do not sell my personal information" page.
Do not sell my personal information.
SettingsAcceptDeclinePrivacy Policy
Manage consent